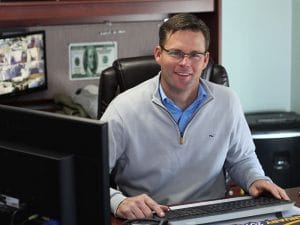 Hubert Keller, seasoned car dealer and business owner, is the gold standard when it comes to customer service. Having worked in the used-car industry for over 22 years and owning a dealership for 12 of those years, he knows exactly what it means to put the customer first. For Keller, this customer-oriented approach has played a significant role in his achievement as the 2017 Quality Dealer of the Year Award recipient.

“The most rewarding part of my job is making people happy,” said Keller. “When a buyer has a problem, I take pride in helping them out. We don’t want them to just take it or leave it, we want to help them work through it.

“I was very excited to win the Quality Dealer of the Year Award,” he continued. “We try to do a lot to help, both in the community and internationally in places like Guatemala, and it’s just cool to be recognized. I’d like to give a shout out to Donnie Bazemore at Southeastern Auto Auction. He’s the one who nominated me for the award.”

Though Keller deserves all of the praise for his success over time, he acknowledges the Georgia Independent Dealers Association (GIADA) for its role as a valuable resource to used-car dealers.

“Anytime we have problems we call GIADA, especially with title issues,” said Keller. “The conventions have been a huge resource for finding new vendors like True Car and others.

“When you go to a convention, most of the time you can get your training out the way,” he continued. “You can network with other vendors and dealers from other areas to see how they do things. It’s been very beneficial and it’s really helped us. Bottom line, it more than pays for itself.”

It’s nearly impossible to work in an industry for more than 20 years without noticing any major trends. Keller explained that sales aren’t what they were compared to last year.

“It doesn’t seem like we’ve had quite the push,” said Keller. “We’ve been busy, don’t get me wrong, but it’s not the craziness that I remember last year. I don’t think prices at the auction have been that high compared to what they normally are. Now that the money has really started to hit this month, I’ve gone to auctions and I expect it to be a little higher.”

There’s bound to be an increase in used-car sales during tax season, right? Not so fast, Keller described why future sales may be leveled in tax seasons to come.

“I think the future could hold less sales, especially with the tax cuts we’ve just received which will go into effect this year,” said Keller. “I just don’t know how much money people will get back since they’re getting more back throughout the year. That could be a good thing since business would be leveled all the way through. Tax season is fun, but very stressful.

“We had trouble buying cars early this quarter,” he continued. “Usually, we try to stock up before tax season but there were several problems. We weren’t able to get stocked up due to the flooding in Texas and South Florida.”

Keller said that though dealers tend to get cars for a good price in the fall, he wasn’t able to do so. He attributed that to business being down at the beginning of the year and a pent up demand after the election.

“We did good last year, but this year we’re off about 30 cars,” said Keller. “This month has started to take off and we expect a really good March.”

Speaking of trends, not all affect dealers positively. Keller mentioned that one of the most stressful parts of tax season is getting flooded with customers.

“One Saturday, we had five people on test drives without salesmen because we didn’t have enough sales people,” said Keller. “Salesmen love it, but it’s stressful. You’ve sold all of these cars and you have to replace them and everyone is thinking the same thing. When you pay more for a car, it’s hard because you have try to sell it. You look at your margins and know the cars you buy during tax season. For me, since I’m not a Buy Here Pay Here (BHPH), I’m going to have a smaller margin. I may make $1000 less on that car. You just really hope you sell it.

“I’m finding that the cars we’re getting now have more problems,” he continued. “The dealership that can work and sell in the back will save the most money. We probably fix 95 percent of our cars and we only send out about five percent. If we send out a lot of cars, we’d be under the water in inventory.”

No matter the challenge, Keller is ready for whatever is thrown his way. His long-lasting career has prepared him for what’s to come. Besides, he has several things to look forward to in the near future.

“I’ve got a good group of salesmen and several others who work really hard,” said Keller. “We’re preparing to really expand this year. We’re about to open up an 11,000-square-foot building with an 11-bay shop and a showroom that’ll hold three cars. We hope to open toward the end of the year at a new location. That’s something very exciting for us.”